Lincolnshire, Ill., Aug. 7, 2018 — Zebra Technologies Corporation (NASDAQ: ZBRA), an innovator at the edge of the enterprise with solutions and partners that enable businesses to gain a performance edge, today announced results for the second quarter ended June 30, 2018.

“Our second quarter results were driven by strong growth from our product and service offerings and disciplined operational execution. Sales and earnings results exceeded our previously communicated guidance ranges and strong free cash flow allowed us to reduce our net debt leverage ratio to 2.5x,” said Anders Gustafsson, chief executive officer of Zebra Technologies. “Given the strength of our results, we are raising our full-year outlook for sales growth and free cash flow. We continue to deliver digital innovation that enables our customers to compete effectively in today's on-demand economy.” 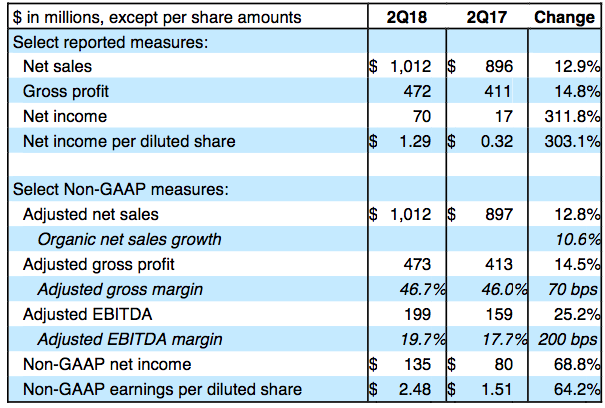 Consolidated adjusted net sales were $1,012 million in the second quarter of 2018 compared to $897 million in the prior year period, an increase of 12.8%. Consolidated organic net sales growth for the second quarter was 10.6% reflecting growth in EMEA, North America and APAC, and a slight decline in Latin America. Second-quarter year-over-year organic net sales growth was 10.9% in the EVM segment and 9.9% in the AIT segment.

Consolidated adjusted gross margin for the second quarter of 2018 was 46.7%, compared to 46.0% in the prior year period. This increase was primarily due to favorable business mix and the favorable impact of currency changes, primarily in the EMEA region. Adjusted operating expenses increased in the second quarter of 2018 to $294 million from $274 million in the prior year period primarily due to growth in the business and increased incentive compensation expense related to improved operating results.

The company expects third-quarter 2018 net sales to increase approximately 12% to 15% from the third quarter of 2017. This expectation includes an approximately 1 percentage point positive impact from foreign currency translation.

The company now expects full year 2018 net sales growth to increase approximately 10% to 12%, which is favorable to our prior outlook and includes an anticipated 2 percentage point positive impact from foreign currency translation.

For the full year 2018, the company expects free cash flow of at least $525 million.

The outlook amounts provided above do not include any projected results from the proposed acquisition of Xplore Technologies Corporation, which is expected to close in the third quarter of 2018.

Investors are invited to listen to a live webcast of Zebra’s conference call regarding the company’s financial results for the second quarter of 2018. The conference call will be held today, Tuesday, Aug. 7, at 7:30 a.m. Central Time (8:30 a.m. Eastern Time). To view the webcast, visit the investor relations section of the company’s website at investors.zebra.com.

These forward-looking statements are based on current expectations, forecasts and assumptions and are subject to the risks and uncertainties inherent in Zebra’s industry, market conditions, general domestic and international economic conditions, and other factors. These factors include customer acceptance of Zebra’s hardware and software products and competitors’ product offerings, and the potential effects of technological changes. The continued uncertainty over future global economic conditions, the availability of credit and capital markets volatility may have adverse effects on Zebra, its suppliers and its customers. In addition, a disruption in our ability to obtain products from vendors as a result of supply chain constraints, natural disasters or other circumstances could restrict sales and negatively affect customer relationships. Profits and profitability will be affected by Zebra’s ability to control manufacturing and operating costs. Because of its debt, interest rates and financial market conditions will also have an impact on results. Foreign exchange rates will have an effect on financial results because of the large percentage of our international sales. The outcome of litigation in which Zebra may be involved is another factor. The success of integrating acquisitions could also affect profitability, reported results and the company’s competitive position in its industry. These and other factors could have an adverse effect on Zebra’s sales, gross profit margins and results of operations and increase the volatility of our financial results. When used in this release and documents referenced, the words “anticipate,” “believe,” “outlook,” and “expect” and similar expressions, as they relate to the company or its management, are intended to identify such forward-looking statements, but are not the exclusive means of identifying these statements. Descriptions of the risks, uncertainties and other factors that could affect the company’s future operations and results can be found in Zebra’s filings with the Securities and Exchange Commission, including the company’s most recent Form 10-K and Form 10-Q.