How to re-map keys on the Windows CE terminal to have different functionality while under the influence of 'Normal' (no shift), 'Blue', and 'Orange' modifier keys

Due to the compact nature of mobile terminals, keyboards for these devices are designed to provide maximum functionality with minimal keys. A byproduct of this design is keyboard functions that may require multiple keystrokes to achieve.

On a typical PC keyboard there are few modifier keys that can be used to alter the behavior of any individual key. Standard modifiers are SHIFT, CTRL, and ALT. Psion adds ORANGE and BLUE function keys to grant additional functionality to each key. This method grants each key on the keyboard 6 possible functions but can also be confusing for users.

This document will describe how to re-map keys on the Windows CE terminal to have different functionality while under the influence of 'Normal' (no shift), 'Blue', and 'Orange' modifier keys. (The process is the same on WM/WEH terminals however the GUI interface looks slightly different)

Every time a key is pressed, a scancode is generated in the OS.
The Keyboard applet can be used to modify the behavior of the scancodes on the Scancode Remap tab. 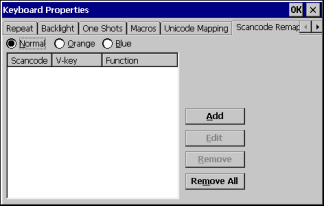 Select the shifted function mode that you want to affect (Normal, Orange, or Blue). This selection will alter keys behave while affected by the Blue or Orange key. The default selection (Normal) indicates that the key behavior will only be altered if there is no modifier enabled.

Press the Add button to display the following interface. On this interface you can select the key that you are remapping by scancode or label (text printed on the key). Populating either of these fields will select the appropriate value in the other.

Second, select the new function that you would like the key to perform. You can select Virtual Key (ASCII characters), Function keys (modifiers), or Macros (macros can be configured on the Macro tab of the Keyboard applet).
Force Shifted indicates that the new key value will interact with the shift modifier. The default value (No Force) complies with the state of the shift key. Setting this value to Force Shifted will force shift regardless of the shift key state. Example: scancode 0066 (the letter A) is remapped to Force Shifted letter A – every time the A key is pressed the resulting letter is a capital A – With this configuration, it is impossible to achieve a lowercase A.

In this example we are re-mapping the Page Down (PgDn) key with Scancode 0029 to the F25 key. This is a common remap for customers using Open TekTerm to access AS400 5250 or 3274 sessions. These sessions use F25 for the AS400 Roll Down function and F29 for the AS400 Roll Up function. 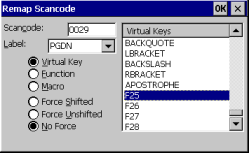 Once both Page Up and Page Down are re-mapped, the 'Normal' screen will look like this. 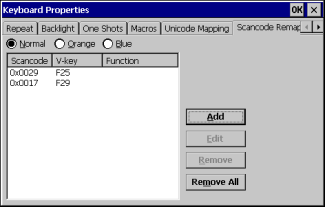 Please be aware that this modification will prevent Page Up and Page Down from working outside of the application. It is generally recommended to remap another set of keys to perform the original function. The below example shows the remapping of Page Up and Page Down with the Orange modifier enabled; this will allow access to the original functions. 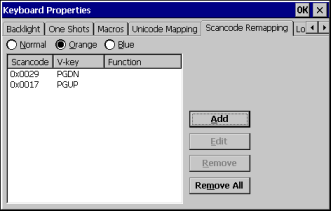