This site uses cookies to provide an improved digital experience. You can learn more about the cookies we use as well as how you can change your cookie settings by clicking here. By continuing to use this site without changing your settings, you are agreeing to our use of cookies. Review Zebra's Privacy Statement to learn more.

“Our solid second quarter results reflected sales in-line with our expectations, gross margin expansion, lower expenses, and improved profitability versus the prior year, against a challenging macro-economic backdrop. Furthermore, we continued to make steady progress on our integration of the Enterprise business,” said Anders Gustafsson, CEO of Zebra Technologies. “We are reiterating our full year outlook with the assumption of no material change to the macro environment, and we remain fully committed to our strategic priorities. We are well positioned as the leader in helping enterprises improve visibility into their operations and are encouraged by our growth prospects going forward.” 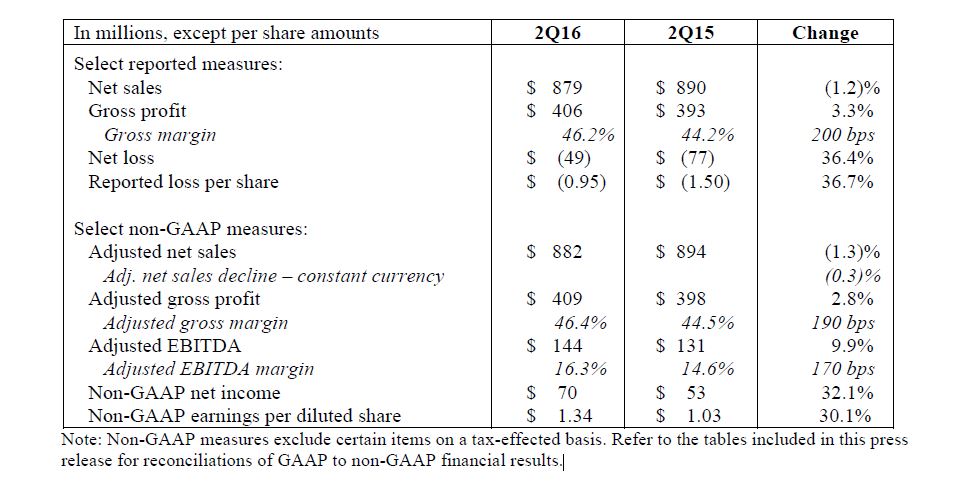 Adjusted gross margin for the quarter was 46.4%, compared to 44.5% in the prior year period, and reflects an increase primarily due to favourable changes in sales mix, improved margin on services, product cost reduction initiatives, and reductions in other costs.

Tax adjustments and estimation changes related to profitability mix by jurisdiction had an approximate $0.14 positive impact to non-GAAP earnings per share in the second quarter of 2016.

For the first half of 2016, the company made $99 million in scheduled cash interest payments and $145 million in term loan principal payments.

For the first half of 2016, the company generated $122 million of cash flow from operations and incurred capital expenditures of $35 million.

The company continues to expect full year 2016 net sales, excluding purchase accounting adjustments, to change approximately (3)% to 1% from the comparable net sales of $3,668 million for the full year 2015. This view reflects an expectation of year-over-year growth of (2)% to 2% on a constant currency basis.

Adjusted EBITDA margin is expected to be approximately 17% for the full year 2016.

The company expects to pay down $300 million of debt principal in 2016.

The company expects third quarter 2016 adjusted net sales to decline approximately (3)% to 0% from the comparable net sales of $919 million in the third quarter of 2015. This expectation reflects year-over-year growth of (2)% to 1% on a constant currency basis.

Adjusted EBITDA margin is expected to be approximately 17% for the third quarter 2016. Non-GAAP earnings are expected to be in the range of $1.30 to $1.50 per share.

Conference Call Notification
Investors are invited to listen to a live webcast of Zebra’s conference call regarding the company’s financial results for the second quarter of 2016. The conference call will be held at 7:30 a.m. Central Time (8:30 a.m. Eastern Time) today. To view the webcast, visit the investor relations section of the company’s website at investors.zebra.com.

About Zebra
With the unparalleled visibility Zebra (NASDAQ: ZBRA) provides, enterprises become as smart and connected as the world we live in. Real-time information – gleaned from visionary solutions including hardware, software and services – give organisations the competitive edge they need to simplify operations, know more about their businesses and customers, and empower their mobile workers to succeed in today’s data-centric world. For more information, visit www.zebra.com. Follow us on LinkedIn, Twitter and Facebook.

Use of Non-GAAP Financial Information
This press release contains certain Non-GAAP financial measures, consisting of “adjusted net sales”, “adjusted gross profit”, “EBITDA,” “Adjusted EBITDA,” “Non-GAAP net income” and “Non-GAAP earnings per share” in addition to measure our operating performance. Management presents these measures to focus on the on-going operations and believes it is useful to investors because they enable them to perform meaningful comparisons of past and present operating results. The company believes it is useful to present Non-GAAP financial measures, which exclude certain significant items, as a means to understand the performance of its ongoing operations and how management views the business. Reconciliations of net sales to adjusted net sales, gross profit to adjusted gross profit, operating income to EBITDA, EBITDA to Adjusted EBITDA, and GAAP net income to Non-GAAP net income are included in the financial schedules contained in this press release. These measures, however, shouldn't be construed as an alternative to any other measure of performance determined in accordance with GAAP.