LINCOLNSHIRE, Ill., Aug. 8, 2017 — Zebra Technologies Corporation (NASDAQ: ZBRA), the market leader in rugged mobile computers, barcode scanners and barcode printers enhanced with software and services to enable real-time enterprise visibility, today announced results for the second quarter ended July 1, 2017.  “Our solid second quarter results reflect excellent execution by our team and strong demand for Zebra’s solutions. Sales exceeded our expectations led by exceptional performance in mobile computing. Profitable growth and disciplined cost management drove earnings per share near the top end of our guidance range,” said Anders Gustafsson, chief executive officer of Zebra Technologies. “Given these results, we expect our full year organic sales growth to be at the top end of our prior outlook. Additionally, our robust free cash flow will allow us to pay down at least $300 million in debt principal in 2017, despite up-front costs associated with the recently announced successful refinancing efforts. With the integration of the Enterprise business complete, we’ll continue to focus on extending our leadership position in growing markets and driving profitable growth.” 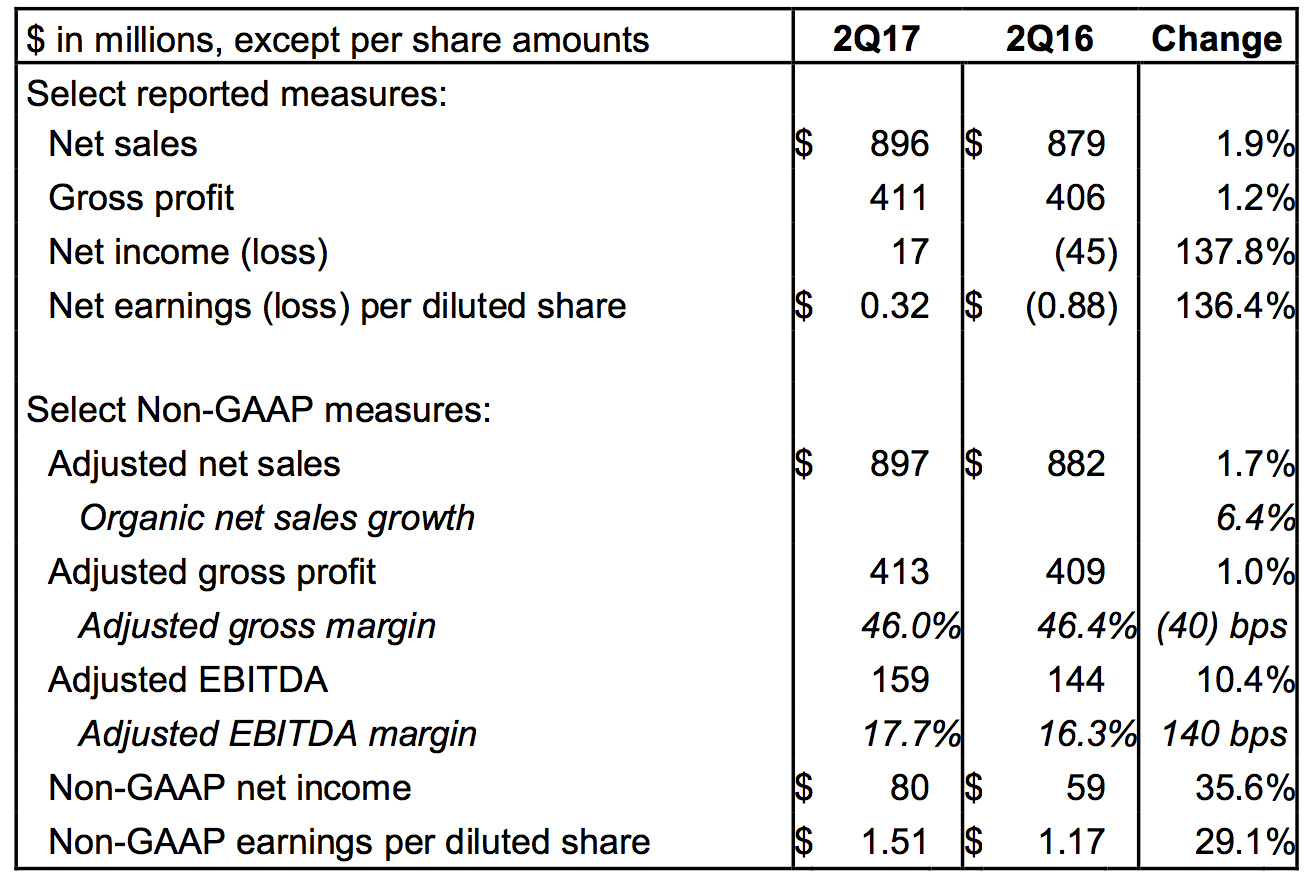 Adjusted gross margin for the quarter was 46.0%, compared to 46.4% in the prior year period. The decrease was primarily due to changes in business mix. Adjusted operating expenses decreased in the second quarter to $274 million from $282 million in the prior year period, reflecting the company's continued focus on improving operating efficiency, controlling expenses, and the divestiture of the wireless LAN business.

Adjusted EBITDA margin is expected to be approximately 18% to 19% for the third quarter 2017, favorable to the prior year period. Non-GAAP earnings per diluted share are expected to be in the range of $1.65 to $1.85, assuming an effective tax rate in the low- to mid-20% range.

About Zebra
With the unparalleled visibility Zebra (NASDAQ: ZBRA) provides, enterprises become as smart and connected as the world we live in. Real-time information – gleaned from visionary solutions including hardware, software and services – gives organizations the competitive edge they need to simplify operations, know more about their businesses and customers, and empower their mobile workers to succeed in today’s data-centric world. For more information, visit www.zebra.com or sign up for our news alerts. Follow us on LinkedIn, Twitter and Facebook.

Use of Non-GAAP Financial Information
This press release contains certain Non-GAAP financial measures, consisting of “adjusted net sales,” “adjusted gross profit,” “EBITDA,” “Adjusted EBITDA,” “Non-GAAP net income,” “Non-GAAP earnings per share,” “free cash flow,” “organic net sales growth,” “adjusted operating expenses,” and “constant currency.” Management presents these measures to focus on the on-going operations and believes it is useful to investors because they enable them to perform meaningful comparisons of past and present operating results. The company believes it is useful to present Non-GAAP financial measures, which exclude certain significant items, as a means to understand the performance of its ongoing operations and how management views the business. Please see the “Reconciliation of GAAP to Non-GAAP Financial Measures” tables and accompanying disclosures at the end of this press release for more detailed information regarding non-GAAP financial measures herein, including the items reflected in adjusted net earnings calculations. These measures, however, should not be construed as an alternative to any other measure of performance determined in accordance with GAAP.