“In the third quarter, we drove higher sales across our major product categories. Our team managed costs well, enabling us to exceed the high end of our profit expectations. We also began executing on our debt restructuring plan, which significantly reduces interest costs,” said Anders Gustafsson, chief executive officer of Zebra Technologies. “Looking ahead to Q4, we expect strong operating performance and free cash flow to enable at least $300 million of debt paydown for the year. We continue to advance our Enterprise Asset Intelligence strategy through our leading portfolio of innovative products and Savanna, our IoT data intelligence platform.” 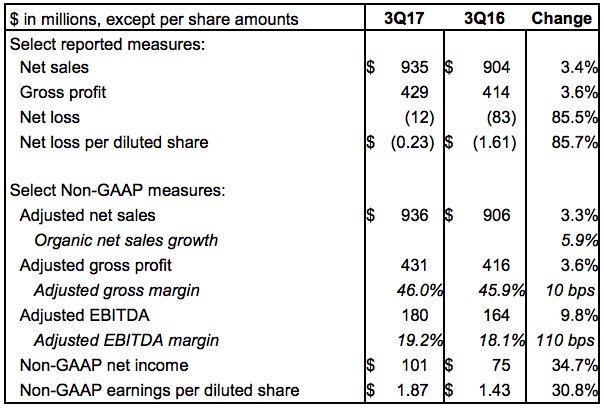 Consolidated adjusted net sales were $936 million in the third quarter of 2017 compared to $906 million in the prior year period, an increase of 3.3%. Consolidated organic net sales growth for the third quarter was 5.9% reflecting growth across all regions, most notably Latin America, EMEA, and North America.  Third-quarter year-over-year organic net sales growth was 5.5% in the Enterprise segment and 6.6% in the Legacy Zebra segment.

As previously disclosed, in the third quarter of 2017, the company began executing on its debt restructuring plan which included an amended senior secured credit facility. This facility includes a new $687.5 million Term Loan A and a $500 million revolving credit facility (increased from $250 million). Proceeds from the new facility were used to redeem $750 million of its 7.25% senior notes.

Adjusted EBITDA margin is expected to be approximately 19% to 20% for the fourth quarter 2017, favorable to the prior year period. Non-GAAP earnings per diluted share are expected to be in the range of $2.00 to $2.20, assuming an effective tax rate in the low- to mid-20% range.

Additionally, for the full year 2017, the company continues to expect to reduce total debt balances by at least $300 million.

Investors are invited to listen to a live webcast of Zebra’s conference call regarding the company’s financial results for the third quarter of 2017. The conference call will be held today, Tuesday, Nov. 7, at 7:30 a.m. Central Time (8:30 a.m. Eastern Time). To view the webcast, visit the investor relations section of the company’s website at investors.zebra.com.

These forward-looking statements are based on current expectations, forecasts and assumptions and are subject to the risks and uncertainties inherent in Zebra’s industry, market conditions, general domestic and international economic conditions, and other factors. These factors include customer acceptance of Zebra’s hardware and software products and competitors’ product offerings, and the potential effects of technological changes. The continued uncertainty over future global economic conditions, the availability of credit and capital markets volatility may have adverse effects on Zebra, its suppliers and its customers. In addition, a disruption in our ability to obtain products from vendors as a result of supply chain constraints, natural disasters or other circumstances could restrict sales and negatively affect customer relationships. Profits and profitability will be affected by Zebra’s ability to control manufacturing and operating costs. Because of its debt, interest rates and financial market conditions will also have an impact on results. Foreign exchange rates will have an effect on financial results because of the large percentage of our international sales. The outcome of litigation in which Zebra may be involved is another factor. The success of integrating acquisitions could also affect profitability, reported results and the company’s competitive position in its industry. These and other factors could have an adverse effect on Zebra’s sales, gross profit margins and results of operations and increase the volatility of our financial results. When used in this release and documents referenced, the words “anticipate,” “believe,” “outlook,” and “expect” and similar expressions, as they relate to the company or its management, are intended to identify such forward-looking statements, but are not the exclusive means of identifying these statements. Descriptions of the risks, uncertainties and other factors that could affect the company’s future operations and results can be found in Zebra’s filings with the Securities and Exchange Commission, including the company’s most recent Form 10-K.